skip to main | skip to sidebar

I never look at the picture part of postcards - I always turn over straight away to read the writingy bit, cos I always think that's more interesting.

The postcard on my doormat was writing-side-up anyway, so I picked it up and perused it.

But the other thing that happens with me and post is that I never read it properly at first. This is partly because my first sight of any post tends to happen with a bike in my arms. I cycle to work, but I keep my bike inside the house, and we have steps leading up to the front door, so I carry my bike over the threshold, simultaneously looking down at the post, and then I have to do a million boring small things like remove cycle clips, helmet, fluorescent vest, and any other waterproofs, hats, gloves, scarves etc that might be cluttering my person.

Often it's just a pit stop, and all I'm doing is swapping work-laden pannier bags for a child seat on the back of the bike before I dash back out again to pick up the kids. Sometimes I have a little golden window of time before that next part of my day, and usually that's spent flitting about the house trying to decide which is most important out of
(a) kettle on (cup of tea),
(b) computer on (check email, find out whether my book has become an internet sensation overnight)
(c) dinner on (it's easier to cook without a 2-yr-old wrapped around your shins)
(d) klobber off
(e) wet laundry out of machine
(f) telly on
...which generally ends up with teabags, fluourescent vests, wet pants and computer keyboards being combined in all the wrong ways.

Aaanyway. That was all an attempt to explain why it took me so long to work out what the hell was the postcard on my doormat, and who it was from. The first thing I looked at was the handwriting. I didn't recognise it. So I looked for a signature. There wasn't one. It was covered in close writing, but there was no name at all. I looked again. There must be a name, surely? No. So I scanned the content. It was something to do with the angle of a chair. Wtf? I looked for a name again, more slowly this time. Nope. Nothing there.

Finally I turned it over and found this: 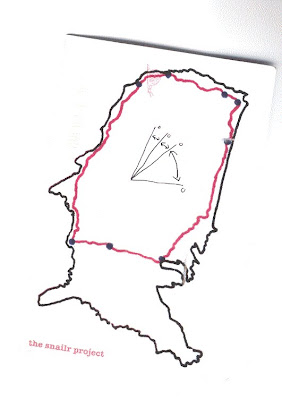 All the time I had been pondering this, I had also been removing cycle clips, putting the kettle on, turning the computer on, etc. I still had tea to cook, kids to pick up, yadda yadda, and I didn't want to read the content in a rush. I wanted to savour it, because this was An Exciting Event. In the end my partner read it before I did. Not knowing who it was from and not having heard of the Snailr project, he pronounced himself Amused But Thoroughly Confused. I'd been through the confusion part already, so I settled on amused. It was a very nice postcard. I'm glad I got it. The writingy part looked like this:

(I couldn't resist the product placement. Forgive me. I wrote that book. You can buy it / find out more about it here. Lucy Pepper designed the cover, and Francis Blake illustrated it. Isn't it beautiful?)

...and this is what the postcard said:

"As I write this the Eastern European grandfather in front of us has been trying to recline his chair to his satisfaction for the last 18 minutes. Continuously.
It is like this angle [see first chair pic on postcard above]
he wants it like this angle [second pic]
it keeps doing this angle [third pic]
Yes. It is basically the same angle three times over. As far as I can tell, he wants to recline it 15 degrees and keeps getting it at 30 degrees by mistake. So he tries again. Ratches clank and scrape as he goes up, down, up, down, his yellow thumbnail hanging over the back. 'Is not stay.' He turns and says to us. Then tries it another 40 times."

It also has a number 3 on it, which I presume means it was the third card sent.

Snailr is Anna Pickard's latest project. It's a brilliant idea. She went on a 2-week train trip around the US of A and documented it by sending postcards. A kind of one-destination-only hard-copy Twittery thing. Ish. Sort of. It's explained better here. Anna is lovely and clever and good with words and I felt very special for having my very own unique Anna Pickard artefact. Thankyou Anna.
Posted by Beleaguered Squirrel at 16:11

What a lovely and unusual idea. And the postcard looks perfect in your book!

That does sound intriguing. I also have a haphazard approach to dealing with post and would probably have lost it without ever getting to read it!

Wow! Fantastic. What a great idea!

I have looked at Anna's thingy and it has confused me even more than the chair angles. But postcards are a good thing, they are made out of happiness. I am going to read Anna's project again when my Brian is activated and then I am going to think of a project of my very own. Or maybe steal one.

Now out of print